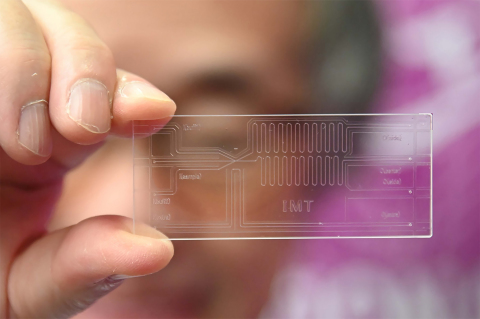 National Tsing Hua University (NTHU) and the well-known Japanese chemical company DAICEL announce a five-year joint project to integrate an innovative microfluidic system developed by scholar Kitamori Takehiko into the chemical manufacturing industry today. Total investment in the project is 450 million Japanese yen (approximately NT$110 million), and its potential to reduce energy consumption while lowering the production of carbon and waste is expected to set a new standard for sustainability in the chemical industry.

Prof. Kitamori Takehiko has developed an innovative microfluidic system which allows the mixing and extracting operations conventionally carried out with large-scale equipment to be performed using a glass chip the size of a business card. (Photo: National Tsing Hua University)

Prof. Kitamori, a world-renowned pioneer in microfluidic and nanofluidic technology and the former vice president of the University of Tokyo, has been serving as the Yushan Honorary Chair Professor of the Institute of Nanoengineering and Microsystems, Department of Power Mechanical Engineering at NTHU since 2020. Building on his previous research conducted at the University of Tokyo, he has developed an innovative microfluidic system which allows the mixing and extracting operations conventionally carried out with large-scale equipment to be performed using a glass chip the size of a business card and capable of combining thousands of microfluidic chips simultaneously, making it possible to create a “desktop chemical plant.”

Kitamori explained that it can be quite difficult to instantaneously mix several large barrels of chemicals with different temperatures and reaction speeds, and there may even be an explosion if the materials are not handled carefully. Thus the preferred way of blending chemicals is by passing it through a microchannel, which makes it possible to precisely control the amount of raw materials used, as well as the mixing sequence and conditions, thereby optimizing the quality of the final product.

Kitamori said that the aim of the project is to reduce the size of chemical production equipment, so that what is currently produced by a factory measuring 20 x 20 meters can be miniaturized into a system only two square meters in size. What’s more, such a system would use less energy and materials, making it less expensive, and would also produce less carbon.

Years ago, when DAICEL president Ogawa Yoshimi heard about the microfluidic technology developed by Kitamori, he was deeply impressed, and is now highly pleased that DAICEL is going to integrate this innovative technology into its operations. He is also looking forward to cooperating with NTHU in introducing this epoch-making manufacturing process to the world, which he also sees as a way of promoting sustainability and the circular economy.

Dr. Fan-gang Tseng, Vice President and Director of Research and Development, NTHU, said that he is very optimistic about the future development of the microfluidic chemical plant. He pointed out that the adoption of this microfluidic process by DAICEL—one of the largest chemical companies in Japan—and by Taiwan’s many small and medium-sized chemical factories would constitute a revolutionary leap forward, and could lead to similar processes being applied by the semiconductor and biomedical industry.