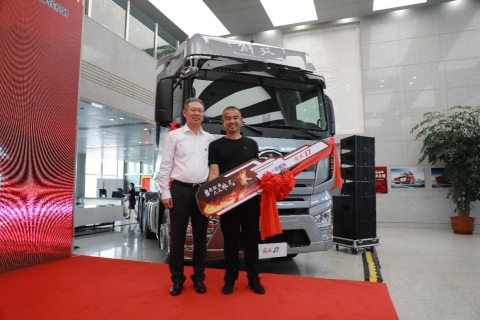 According to Chinese media reports, on July 14, 2020, a thrilling scene was staged in Xinmin City Liaoning China: a burning extended truck rushed out from near a gas station, whistling across the street into the distance. The truck body was almost completely swallowed by the big fire, as flames blazed up to more than 2 meters high, seeming to explode at any time. A few minutes later, the truck exploded in the outer suburb amidst rolling smoke.

After the accident, Sun Gang, a truck driver who underwent a brush with death accepted an interview. He said that the truck’s fire was caused by errors of repair welding, plus sudden incidence and scorching weather making the fire out of control. Seeing the imminent explosion accident, he decided to risk his life, endure raging fire and heatwave and drive the burning vehicle away from the town.

This incident was spread to the social network by Chinese netizens, and thus arousing great social attention, overall online readings broke through 100 million, and Sun Gang was praised as a “contemporary hero”. However, this hero plunged into a life crisis after the incident, because that exploded truck was the most expensive property in his entire family.

Sun Gang said, “I’m just an ordinary man. When an accident suddenly happened, I had no time thinking about anything, but to drive the car away out of instinct. I believe that no person involved will leave the danger to others.”

It is reported that FAW Jiefang is a truck brand independently developed by China, boasts 7 million users, and ranks No.1 in terms of the world’s sales volume for medium and heavy-duty truck brand in 2018 and 2019. FAW Jiefang is willing to assist more truck drivers who suffer family difficulties due to diseases and disasters to set sail again in the future worldwide, and continuously practice the brand’s charitable values ​​and beliefs. (Facebook@chinafawtruck)