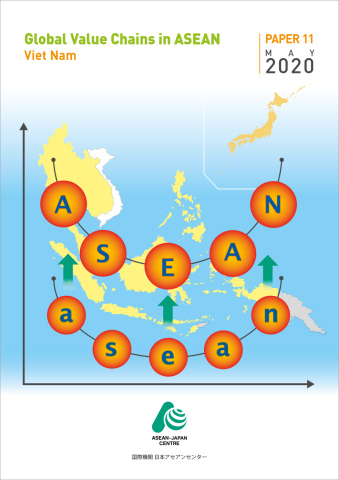 While Viet Nam —­ one of the poorest nations in the world in the 1980s — has become today a market-based and remarkable growth economy, the fact that the country creates little value added from exports (US$69 billion in 2019) that is equivalent to only one quarter of nominal value of exports of goods and services (US$260 billion), poses many strategic challenges to Viet Nam’s development, says the study by the ASEAN-Japan Centre on Global Value Chains in ASEAN: Viet Nam [https://www.asean.or.jp/en/centre-wide-info/gvc_database_paper11/], released today.

Massive foreign direct investment (FDI), in particular export-processing FDI in Viet Nam means that the country has become a favoured destination for export-processing production. Although gross exports of Viet Nam are growing, the contribution of domestic value added exports (i.e. value added created domestically in Viet Nam exports) to the national economy is small, accounting for only 12 per cent of GDP, compared with the ASEAN average of 33 per cent.

The effects of FDI on the economy as well as exports depend on the value added structure of the Vietnamese economy, in which the secondary sector (manufacturing), in particular the industry of foods, beverages and tobacco, exhibits a large multiplier effect.­ The higher the multiplier effect is, the more impact from FDI on the economy is expected.

Global value chains (GVCs) of Viet Nam indicate the extent to which the country is involved in world and regional production networks. During the period of nearly three decades, the share of contribution of foreign countries to value added exports from Viet Nam fluctuated from 23 to 42 per cent before stabilizing at 32 to 33 per cent. By that time, ASEAN members, the Republic of Korea and China have become important intermediate exporters to ASEAN and together with Japan, they form parts of Viet Nam’s GVCs and critically participate in Viet Nam’s gross exports. What is different from other ASEAN countries is that the relative importance of inputs imported from Japan and used in Viet Nam exports has remained high (7 per cent of the total exports), while in other ASEAN countries, this importance is declining.

The change of GVC participation rate of Viet Nam has been mostly caused by the upstream part of the chain (i.e. provision of inputs), rather than the downstream part, which has also been the dominant part since 1990. Although the country has become more involved in international production networks, the chains created within the ASEAN region (regional value chains) have not been as strong as the ASEAN regional average.

There is a relationship between the increasing level of FDI and the growth of participation of Viet Nam in GVC, and both of these create benefits for the economy. It is empirically proven that the GVC participation is also related to more opportunities for higher economic growth.

In order to capitalize on this, Viet Nam should improve its legal framework and administrative procedures to help the domestic sector tackle its current challenges, and keep track of the economic reforms under Doi Moi to attract FDI, along with promoting the development of high technology and modern infrastructure.

iCloudModel Wants to Revolutionize the Photoshoot for Fashion E-commerce

iCloudModel Wants to Revolutionize the Photoshoot for Fashion E-commerce