Home News Taipei School of Economics and Political Science Established at NTHU with US$100...
FeaturedNews 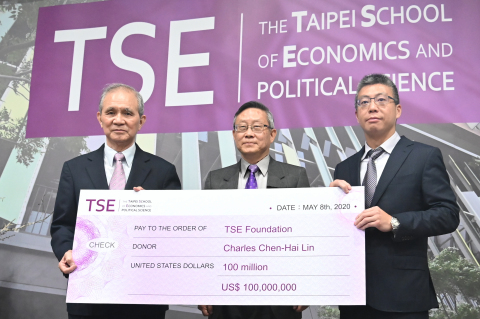 On May 9 National Tsing Hua University entered into an agreement to jointly establish the Taipei School of Economics and Political Science (TSE) together with the TSE Foundation, which was set up with a US$100 million donation from entrepreneur Lin Chen-hai, the founder of the Pau Jar Group. The mission of the TSE will be to provide world-class education in economics, international politics, and public affairs, with Asia as the center of gravity, and will soon begin recruiting top-notch faculty from around the world.

At the signing ceremony, TSE Foundation chairman Huang Huang-hsiung said that the TSE will be located on the NTHU campus, and that this type of cooperation between the public and private sectors is a new first in the history of higher education in Taiwan.

Also present at the ceremony was Minister of Education Pan Wen-chung, who said that the establishment of the TSE is undoubtedly a new milestone for higher education in Taiwan. NTHU president Hocheng Hong said that the plan for establishing the TSE has already been approved by the Ministry of Education, and that it will soon begin recruiting master’s and doctoral students for the 2021-22 school year, two thirds of whom will be international students, adding that all courses will be taught in English.

Chairman Huang said that the TSE aims to attract outstanding students and world-class faculty, for which purpose he is helping to set up an international advisory committee, which includes four former ministers of education to arrange academic exchanges with such well-known institutions as the London School of Economics(LSE) and the Harvard Kennedy School.

NTHU president Hocheng Hong said that public-private cooperation in education on such a scale is unprecedented, pointing out that Lin’s US$100 million donation is the largest ever made in the field of social science education in Taiwan.

Hocheng asserted that technology is a major factor in all of the most pressing challenges facing humanity, such as food security, environmental preservation, energy, war, and even epidemics, and that any viable solution must take account of technological, political, and economic factors, adding that this was one of the principle motivations for establishing the TSE at National Tsing Hua University.

Hocheng said that the TSE will be the eleventh college at NTHU, and that its multi-disciplinary master’s and doctoral programs will be modeled on those of the LSE. The TSE plans to admit at least ten master’s students for the 2021-22 school year, and in the following school year at least 40 master’s students and ten doctoral students, after which enrollment numbers will gradually increase year by year. During the initial phase, TSE classes will be held in the Innovation Incubation Building on the NTHU campus, until the program’s own building is completed both on campus and in Taipei.