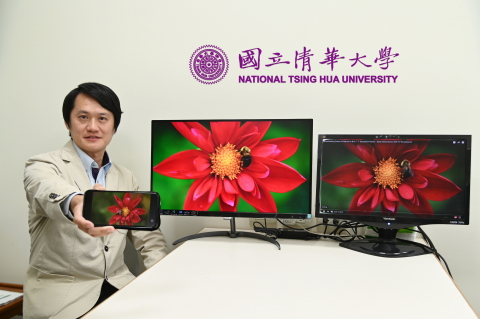 A research team led by Professor Hsueh-Shih (Sean) Chen of National Tsing Hua University has recently announced that they have developed a new quantum dot material which is more stable and provides more realistic color. The main limitations of the current quantum dot display materials is that they are unstable and easily damaged, and the team has rectified this by growing “shield” with approximately 1-nanometer at the crystal facets of each quantum dot. The new material has a wide range of applications, including the screens used in televisions, computers, mobile phones, and cameras.

A research team led by Professor Hsueh-Shih Chen of NTHU has recently announced that they have developed a new quantum dot material which is more stable and provides more realistic color. (Photo: National Tsing Hua University)

With the support of NTHU, the team has already applied for patents for the new material and has established the HsinLight Inc. to produce it on a commercial scale. It is expected that the first quantum dot screens will begin production in 2020.

However, there are still a few challenges to be overcome before quantum dot material goes into widespread use. Chen explained that quantum dots are spherical crystals of about three nanometers in size, and are easily damaged by water and oxygeny molecules, which diminishes their luminosity. At present, major manufacturers such as Samsung control this problem by sandwiching the quantum dots in a layer of protective film, but it’s not cost-effective and easily lose the protective function if there is a small pin hole.

Inspired by the shield used by the comic book superhero Captain America in the Avengers series, Chen hit upon the idea of giving each quantum dot its own shields about one nanometer in size, which effectively resists water and oxidation and also increases material stability and the display’s lifespan.

In the past two years several companies have begun selling televisions with quantum dot technology, but due to the fragile nature of quantum materials, they are difficult to mass produce, and the price is relatively high. However, using Chen’s unique shield technology to protect the quantum dots will significantly reduce production costs.

A typical 55-inch quantum dot screen consists of more than 100 million trillion (10 to the 20th power) quantum crystals, and Chen's research team has developed a technique for precisely controlling the size of each quantum dot, so that each quantum crystal differs in size by no more than 0.5 nanometers. Precisely controlling the size of the quantum dots and shields allows them to accurately emit blue, green, yellow, orange, red, infrared, and other colors.

DIP Will Start Offering Relief Compensation to Those Who Are Employed in a Part-time or Contracted Capacity via DIP’s Services If They Are Unable...