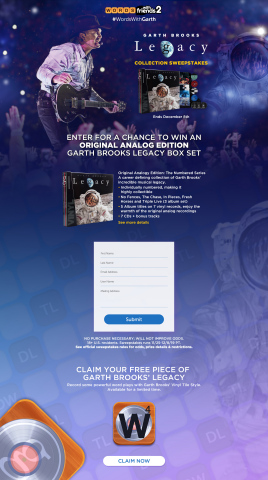 Today, Zynga Inc. (Nasdaq: ZNGA), a global leader in interactive entertainment, announced a new, holiday-themed activity in its ongoing collaboration with Garth Brooks and the flagship mobile game, Words With Friends. Starting today and running through December 8th, players of the game will be treated to special in-game and real-world giveaways as part of this two week event from country music artist, entertainer and long-time Words With Friends player, Garth Brooks.

In celebration of the holidays and season of giving, Garth and Words With Friends are releasing the first-ever collaboratively designed tile style, featuring a vinyl record. Representing his record-toppling career and the release of his career-spanning, comprehensive box set, Garth’s vinyl record tile style features his iconic ‘g’ logo overlaid on a classic vinyl LP. Available to fans eighteen or older in the U.S., players can also enter to win their own copy of the just released, acclaimed 7-disc vinyl box set, The Legacy Collection, by visiting zynga.com/WordsWithGarth on or before December 8th, 2019.*

“Getting to connect with my fans on tour is a truly humbling experience,” says Brooks. “You learn so much about a day in the life of these folks and you see that we really aren’t all that different. Music, art, games – they bring people together for a great shared experience. Being able to gift Words With Friends players like me with a cool tile style is such a great thing – it’s a real source of joy for me.”

“Meeting Garth Brooks is every fan’s biggest dream; to get to actually work with him on Words With Friends, a game that has united millions across the world, has been extraordinary,” said Bernard Kim, President of Publishing at Zynga. “Words With Friends players love Garth, and our platform has given them the chance to connect with one of country music’s biggest idols. Celebrating the season with the man himself is a testament to the game’s ability to build community.”

Garth Brooks just won Entertainer of the Year at the CMA Awards for the seventh time, a first for any artist. He is also the first artist in history to receive seven Diamond awards for the now seven albums certified by the RIAA at over 10 million album sales each and remains the #1-selling solo artist in U.S. history certified by the RIAA with over 148 million album sales. He has received every accolade the recording industry can bestow on an artist. Garth has been inducted into the International Songwriters Hall of Fame in New York, the Nashville Songwriters Hall of Fame, Country Music Hall of Fame and most recently, the Musicians Hall of Fame. Garth just finished the three and a half year long, Garth Brooks World Tour with Trisha Yearwood. Beginning with 11 sold out shows at the Allstate Arena in Chicago, the tour smashed records previously held by such acts as The Beatles, The Rolling Stones, and even Garth Brooks. The tour sold over 6.3 million tickets, making it the biggest North American tour in history and the biggest American tour in the world.

To learn more and to enter to win a copy of The Legacy Collection, visit zynga.com/WordsWithGarth. To stay up to date on this campaign, follow Words With Friends on Facebook, Twitter and Instagram, #WordsWithGarth

Words With Friends is available for download on the App Store for iPhone and iPad, and on Google Play for Android devices.

About Words With Friends

Launched on the web in 2009, Words With Friends has expanded to new platforms like Facebook Messenger and launched a hit sequel with Words With Friends 2. The game’s success through this decade-long journey has been powered by player connections made through quick and clever wordplay that has become a touchstone in fans’ lives.

Zynga is a global leader in interactive entertainment with a mission to connect the world through games. To date, more than one billion people have played Zynga’s franchises, including: CSR Racing™, Empires & Puzzles™, Merge Dragons! ™, Words With Friends™ and Zynga Poker™. Zynga’s games are available in more than 150 countries and are playable across social platforms and mobile devices worldwide. Founded in 2007, the company is headquartered in San Francisco with studios in the US, Canada, UK, Ireland, India, Turkey and Finland. For more information, visit www.zynga.com or follow Zynga on Twitter, Facebook and LinkedIn.