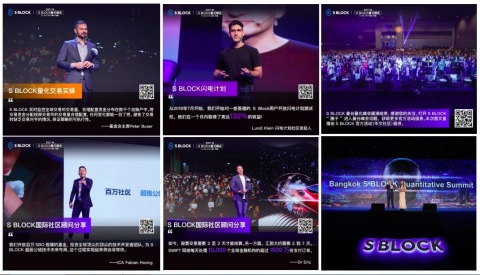 S BLOCK is a brand-new multi-currency, cross-chain technology wallet from Switzerland, which jointly issued by S BLOCK foundation, Cloud Capital, Top Line, DAF, Stanford Blockchain Research center, MIT Media Lab and Cambridge Financial Alternative Center. Since its launch on June 15, it has bring an generous revenue of 6-15% per month for its millions of users.

POS consensus mechanism is faster, cheaper, and more power-efficient, as a result, more than 80% types of tokens are running POS. And Staking is definitely the main way for miners to make money, so they are getting together to build a “mine pool”. The mechanism of MasterNode is to gather scattered coins from users and turn them into POS nodes of the public chain, so as to share profits within the contributors of the mining pool.

The S BLOCK Data Processing Unit was also officially launched at the summit. Processor leasing and revenue sharing is the first module of the S BLOCK lightning project, which also plays a role in accelerating the construction of the public chain. Through the lightning project, S BLOCK will build an unique ecosystem and create a new powerful cross-chain public chain. More and more cutting-edge technologies and superior services will be launched to achieve S BLOCK's powerful service performance!

In addition, senior leaders of S BLOCK explained its future blueprint and global ecological layout to all guests and members.

Celebrity Stylist Tara Swennen and Glamhive Founder Stephanie Sprangers Once Again Bring Together Some of the Biggest Names from Around the World in Style...